On January 8, 2018, the Inter-American Court of Human Rights issued a landmark advisory opinion (OC-24) affirming that all signatory countries should extend all existing legal protections – including marriage – to same-sex couples. The advisory opinion also stated that the American Convention on Human Rights protects the right of an individual to update their legal name and identity documents to match their gender identity. 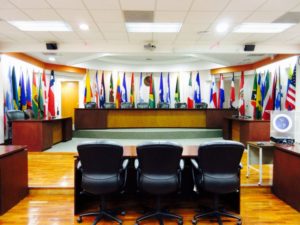 The Inter-American Court delivered its opinion following a request from the Costa Rican government. Firstly, Costa Rica wanted to know what its obligations were, in accordance with the Convention, to individuals who wished to formally change their name based on their gender identity. Secondly, Costa Rica wanted to know, under the Convention, what patrimonial rights they needed to afford same-sex couples. In addition to answering the questions it was presented, the Court further affirmed the full set of rights and protections the Convention affords to same sex couples:

“. . . Costa Rica requests an opinion from this Tribunal concerning the patrimonial rights that are derivative of the unions of same-sex couples. . . . [However,] [t]he international obligations of each State transcend extending patrimonial rights to same-sex couples. Each State has an obligation to extend all internationally recognized human rights, as well as all rights and obligations recognized under State law that pertain to families, and that are afforded to heterosexual couples . . . [Therefore,] pursuant to the Convention, States are required to guarantee same-sex couples access to their right to marriage, without discriminating between same-sex and heterosexual couples.

“…[W]e can conclude that the right of each person to autonomously define their sexual and gender identity, and the right to have their self-defined identity be accurately reflected in, for example, identification documents, are rights protected by the American Convention…This means that States must ensure that every person have the opportunity to register, change, modify, or adjust their name, as well as all other essential components related to their identity, such as their image or references to their gender, without interference from public officials or third-parties…

The court’s advisory opinion is binding in the 25 countries across Latin America and the Caribbean that have ratified the Convention. Those countries are:

Though many of these countries had already secured civil marriage for same-sex couples prior to OC-24, legal and legislative efforts are underway in the 15 remaining countries to win civil marriage and build public support and understanding for LGBT people.

In August 2018, Costa Rica became the first signatory country to take tangible steps towards the implementation of the IACHR’s advisory opinion, as the Supreme Court ruled in favor of the freedom to marry – noting that OC-24 clearly prohibited existing discrimination against same-sex couples. The ruling gave lawmakers 18 months to update the law – or if no action is taken, marriage for same-sex couples will automatically become law on May 26, 2020.